Starting from scenario 15C1 (also rightly for next scenarios 16C1, 17C1, etc), developers of GMC simulator added new feature with increased competition in the labor market of assembly workers. In earlier scenarios 12C1-14C3 labor market of assembly workers almost always allowed to recruit the exact number of staff specified in the decision, now it is possible to recruit 100% of the specified number only with comparative weak competition between companies in the group. The "capacity" of the labor market decreased by 2 and workers are not enough for everyone. Particularly brightly the shortage of labor market appears in the final stages of the championship, which rises intense competition between the teams even more.

On the other hand, a detailed understanding of the mechanism of workers recruiting allows to gain an additional advantage over competitors, which can become a key. Below we will consider what factors influence on workers recruiting most of all. If there is no time to read the whole text, then proceed to the hints at the end of the article.

According to the statistics we collected, maximum number of recruited workers in the 1 period is 237 when total recruiting 250-260. Total recruitment limit for all teams in the group is 237 maximum. For example, in group of 8 teams, this corresponds to about 30 assembly workers per team, which is more than enough for a comfortable game.

The spread of recruited and recruiting assembly workers is about the same as for scenario 12C3. The reason is same, management budget is only 115, which is less than optimal budget (150 - 180) for the size of company that is proposed for management in this scenario. Maximum number of actually recruited workers is 215 with total recruiting in the group 262.

Management budget is already 150 and the spread between recruited and recruiting workers is less than for scenarios 12C3 and 14C1. Also, for this scenario, large number of workers is not necessary, so maximum number of actually recruited workers according to our data is 163 with a total recruiting of 178.

First scenario, where free space in factory is limited and in 1 period you can recruit maximum 29 assembly workers (if you do not sell machines). Maximum number of actually recruited workers is 128 when recruiting 133 and recruited 126 when recruiting 182. Obviously, the capacity of labor market (limit on single recruitment) decreased even more compared to 14C3 scenario. Default management budget is 80.

The results of the correlation analysis 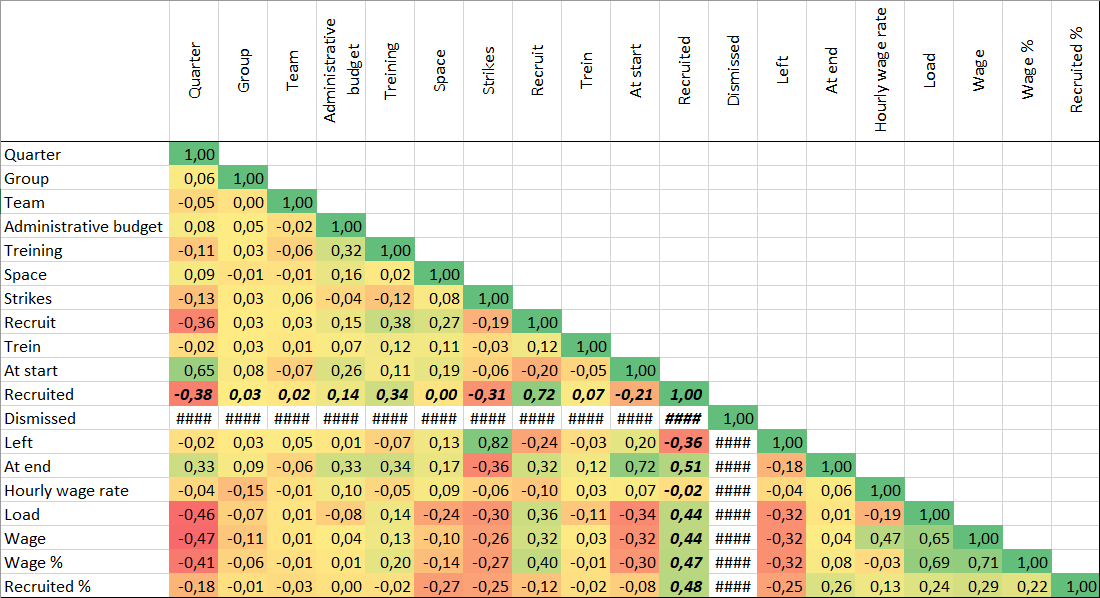 Explanations to the table:

We analyzed correlation of the factors that can be specified in management decision (correlation value is in the parentheses), i.e. can be changed directly to affect the number of recruited workers:

Correlation is 0,47. In the result of searching for clean tests for workers recruitment, 4 complete groups were found, which allowed to determine dependence of number of actually recruited workers on wages. Other parameters of the management decision are the same. 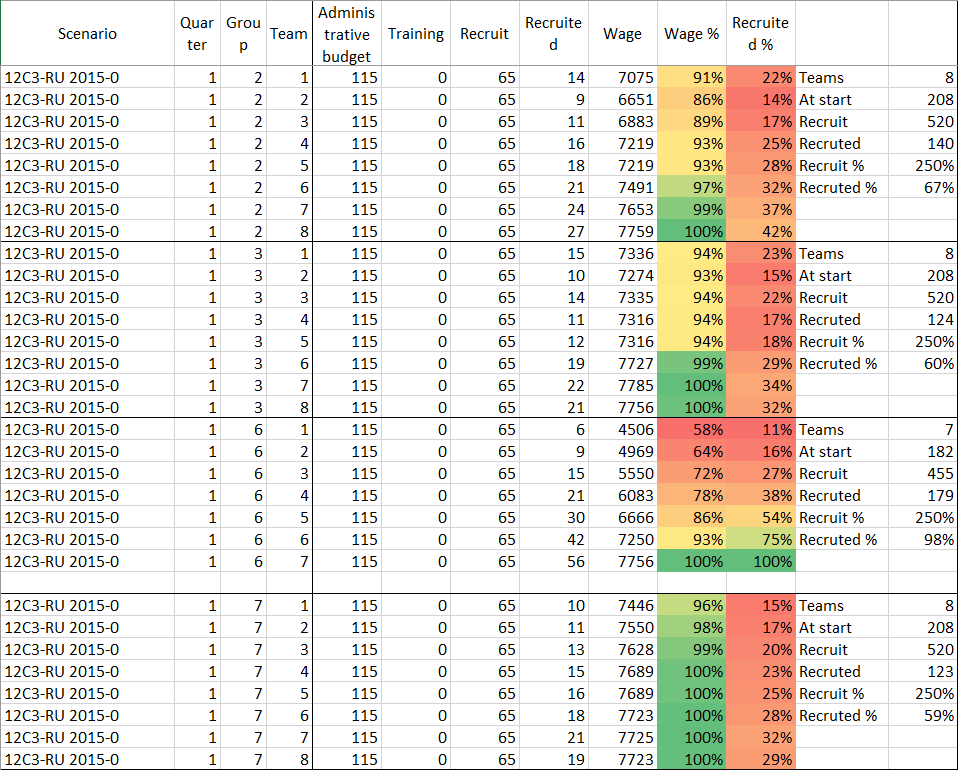 Charts show ratio of wages to the number of recruited workers in each group (1 - 4). In the charts on the left side, OY axis shows Wage from the maximum in the group, %, and in the right side of the charts, OY axis shows rank (1 - 8) in wage level from the minimum to the maximum among companies in the group. Based on the distribution of dots relative to the trend line, it can be assumed that the GMC simulator uses wage rank of the team, when calculating number of actually recruited workers, rather than relative or absolute value of wages among teams in the group. Thus, the wage factor is calculated by rank (1 - 8) relative to competitors in the group and takes into account load of the workers and hourly wage rate. 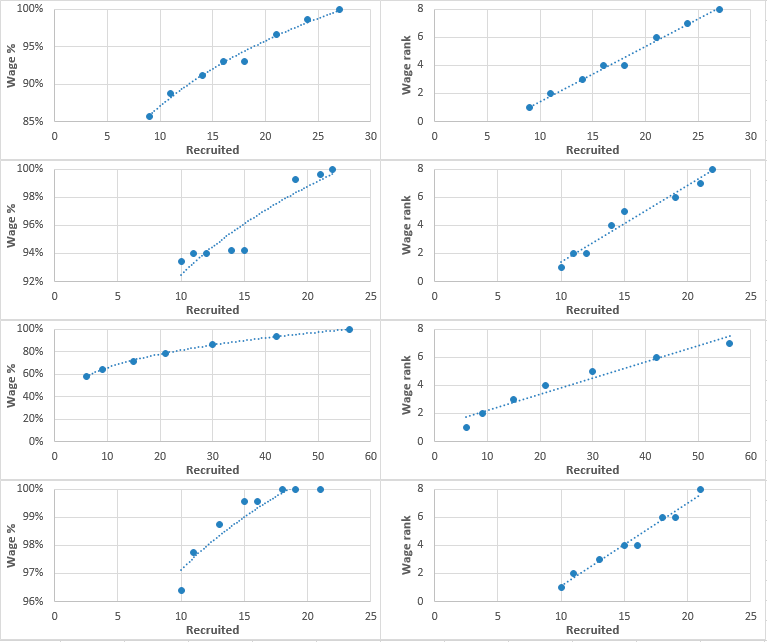 It should be noted that total number of actually recruited workers in groups varies from 123 to 179 (+46%). Also, groups are differ by average wages of the workers. The greater the difference between maximum and minimum wage among companies in the group, the more workers in total companies can recruit. Those, increased competition reduces chances of recruiting required number of workers for each company. Dependence is not direct, but it can be traced. 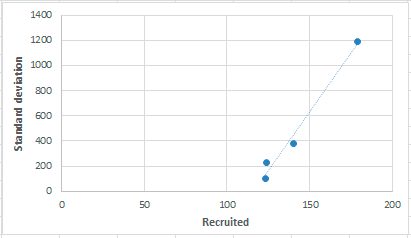 Correlation is 0,14. Increase of management budget positively influences on chance to recruit the required number of workers. Clean tests that could demonstrate such dependence are not found in the database, therefore, chart below shows the relationship between management budget and total number of recruited workers from required for all teams, where recruiting was more than 40 workers.

Increase of training has stronger influence on chance to recruit required number of workers than management budget. Chart shows relationship between training and total number of recruited workers from required for all teams, where recruiting was more than 40 workers.

Additional confirmation, this is example from international final from season 2016:

With higher wage (France's rank higher than Estonia) and management budget, France actually hired only 3 workers instead of 6 in Estonia, which indicates a significant weight of training in ranking of teams for calculating recruited workers.

Each of the factors has its own weight in calculation. Based on correlation analysis, we establish weight of coefficients and check distribution of recruited workers on several groups, as a result we obtain the following weight coefficients: